Film Production Technique …. from a talk given by Alfred Hitchcock in 1948 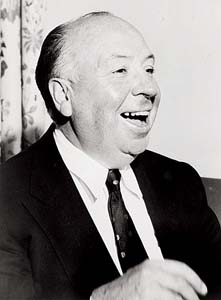 The filming of each picture is a problem in itself. The solution to such a problem is an individual thing, not the application of a mass solution to all problems. Film production methods of yesterday may seem out of date today and yet, tomorrow’s problem may be best solved by using yesterday’s methods. The first rule of direction must be flexibility.

Nothing should be permitted to interfere with the story. The making of a picture is nothing but the telling of a story and the story – it goes without saying – must be a good one. I do not try to put on to the screen what is called ‘a slice of life’ because people can get all the slices of life they want out of the cinema. On the other hand, total fantasy is not wanted because people desire to connect themselves with what they see on the screen.

Those are all the restrictions I would place on the story. It must be believable and yet not ordinary. It must be dramatic and yet lifelike.

Having decided upon our story, we must next develop our characters and the plot. When that is done, are we ready to go on to the floor? I maintain we are not because our picture is going to need editing and cutting – and the time for this work is before shooting. The cuts should be made in the script itself, before a camera turns and not in the film after the cameras have stopped turning.

My objection to the more conventional method of cutting is twofold. First of all, it is wasteful. The tragedy of the actor whose entire part ends on the cutting-room floor is not entirely a personal one. His salary, the sets he acted in and the film on which his acting was recorded all represent expenditure.

More important, if each scene is filmed as a separate entity out of sequence, the director is forced to concentrate on each scene as a scene. There is the a danger that one such scene may be given too great a prominence in direction and acting and its relation to the remaining scenes in the picture will be out of balance, or again, that it may have been given insufficient value and, when the scene becomes part of the whole, the film will be lacking in something.

The ‘extra shots’ made after the regular schedule is completed are necessitated because, in the shooting of scenes, story points were missed. The extra expository shots are generally identified by an audience for what they are – artificial devices to cover what had been overlooked in the preparation of the film.

How can this be avoided? I think it can best be avoided if a shooting script is edited before the shooting starts. In this way, nothing extra is shot and, most important, story points will be made naturally within the action itself.

If we do not edit before we shoot, we may be faced in the cutting room with one of the most difficult of editorial problems – the unexplained lapse of time. The passage of time may be essential to the plot but it may not have been made clear in the sequences that have been shot. There was a time – long since passed – when one would simply have photographed the words ‘one week later’ in transparency and caused them to appear on the screen in mid-air during the second scene.

The lapse of time can easily be indicated by the simple method of shooting one scene as a day scene and the next as a night scene – or one scene with leaves on the trees and the next one with snow on the ground. These are obvious examples but they serve to point to the need for script editing before production commences. 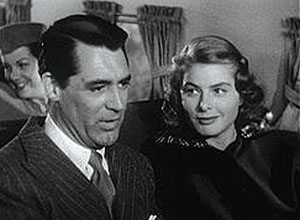 A director tries never to go on the floor without a complete shooting script but, for one reason or another, one often has to start with what is really an incomplete script. The most glaring omission in the conventional script, I believe, is camera movement.  The director may decide on the floor how he is going to film a sequence – but I maintain that the time for such a decision is in the preparation of the script.

Here we encounter once again the fact that the tendency today is to shoot scenes and sequences and not to shoot pictures. The angle from which a scene is to be shot ought to flow logically from the preceding shot and it ought to be so designed that it will fit smoothly into whatever follows it. Actually, if all the shooting is planned and incorporated into the script, one will never think about shooting a scene but merely about shooting a picture of which the scene in question is a part.

The object of these remarks is to emphasize that I favour shooting pictures in sequence. The film is seen in sequence by an audience and the nearer a director gets to an audience’s point of view, the more easily he will be able to satisfy the audience. The satisfaction of an audience has been deprecated as an aim of picture making and I think that is a very grave mistake. There has been a tendency to sneer at audiences, to regard them as a tasteless mass to whose ignorance phenomenal concessions must be made by producers and directors.

Why is this? One reason is that a director hears comments about his work constantly and these comments come, for the most part, from people associated with the industry. It is laudable to seek the applause and approbation of one’s co-workers but, once one begins making pictures for their satisfaction, it is only a short step to condemning lay audiences for their lack of appreciation of cinema craft.

This is a dangerous point of view. Of course, it is a fine thing to make a picture whose technique excites admiration from people who indeed understand technique – but these are not the people who pay the costs of production!

A picture-maker need not try to please everyone. It is important to decide at what audience one is aiming and then to keep one’s eye on that target. It is obviously uneconomic to shoot for a small audience and a motion picture costing some hundreds of thousands of pound, which has taken the efforts of perhaps one or two hundred men, cannot direct its appeal towards people with a special knowledge of film-making or to a certain section of the community.

To approach a cinema audience with contempt invites contempt in response. The great playwrights, Barrie and Pinero for example, rendered more than lip service in their respect for their audiences. They wrote every line with a conciousness that it was designed to entertain adult human beings and every line they wrote shows it. By the reasoning of those who maintain that intelligent drama cannot obtain a mass audience, their plays should all have been artistic successes and financial failures – but we know that they were well received, that many of them were terrific hits and we should profit by that knowledge.

I turn now to the actual techniques of picture-making. I have a liking, for instance, for a roving camera because I believe, as do many other directors, that a moving picture should really move. I have definite ideas about the use of cuts and fade-outs which, improperly handled, can remind the audience of the unreality of our medium and take them away from the plot – but those are personal prejudices of mine. I do not try to bend the plot to fit technique – I adapt technique to the plot. A particular camera angle may give a cameraman, or even a director, a particularly satisfying effect but, dramatically, is it the best way of telling whatever part of the story it is trying to tell? If not, it should not be used.

The motion picture is not an arena for the display of techniques. An audience is never going to think ‘what magnificent work with the boom!’ or ‘that dolly is very nicely handled!’  The audience is mainly focussed on what the characters on the screen are doing – and it is a director’s job to keep the audience interested in that. Technique which attracts the audience’s attention is poor technique. The mark of a good technique is that it is unnoticed. 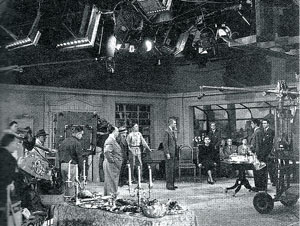 Even within a single picture techniques should vary, although the overall method of handling the story, the style, must remain constant. It is, for instance, obvious that audience concentration is higher at the beginning of a picture than at the end. The act of sitting in one place must eventually induce a certain lassitude. In order that this lassitude should not be translated into boredom or impatience, it is often necessary to accelerate the progress of the story towards the end – particularly of a long picture. This means more action and less dialogue or, if dialogue is essential, speeches ought to be short, a little louder and more forceful that they would be if the same scene were played earlier in the picture.

It is sometimes necessary to encourage artistes to overact!  Of course, it takes a certain amount of tact to induce a good actor to do so and this is another argument in favour of shooting pictures more or less in sequence because, once one has edged an actor into overacting it is, sadly enough, entirely impossible to edge him back again!

Direction is, of course, a matter of decisions. The important thing is that the director should make his decisions when the need for them arises and operate with as few rules as possible.

Alfred Hitchcock was born on 13 August 1899, in Leytonstone, London – the son of greengrocers William & Emma Hitchcock. After graduating from the London County Council School of Engineering and Navigation, he became a draftsman and advertising designer with a cable company. During this period, he became intrigued by photography and started working in film production in 1921 in London as a title-card designer for the London branch of what would later become Paramount Pictures.

In 1920, he received a full-time position at the then American-owned Islington Studios and their British successor, Gainsborough Pictures, designing the titles for silent movies. His rise from title designer to film director took five years and, by the end of the 1930’s, Hitchcock had become one of the most famous film-makers in England. Alfred Hitchcock made in excess of eighty films and several television series

Posted by networkninenews on November 27, 2012 in How It All Began