RSS
← RAY HARRYHAUSEN, Visual Effects Wizard 1920 – 2013
I WANT TO BE A CINEMATOGRAPHER…..OR A DIRECTOR! by Robin Vidgeon BSC →

THE MAGIC OF MATTES AND MINIATURES by Leigh Took 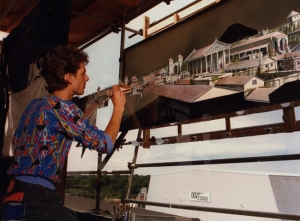 When I reflect on the last thirty years and how I arrived at this point in my career, the key drive has been a philosophy of enthusiasm and positivity – a strong and continuing motivation to work in film and an optimism that the British Film Industry (and in parallel, my own career) will continue to be successful whatever obstructions are thrown in the way.

Ever since I can remember I have had a keen interest in art (as I grew older this interest refined to painting, design and sculpture) and, of course, film. I was very fortunate to secure work experience at Pinewood Studios where I was able to marry my two great loves – art and film. Cliff Culley, who ran a matte painting company there, was impressed with the artwork I had taken to show him and employed me, along with four other teenagers. At that time, matte painting on glass was a very specialized thing with only a handful of people in the UK doing it, all of whom had ‘come up through the ranks’.

I decided to make myself indispensable to Cliff, managing to help out in every way I could, from making the tea to making sure there was always a clean palette and brushes for Cliff every day that he came in to paint. I became an apprentice and, as with any apprenticeship, the wages weren’t great – but without that initial opportunity I doubt I would be where I am today. Amongst the first films I worked on as a trainee were ‘Warlords of Atlantis’ in 1978 and the Ray Harryhausen film, ‘Clash of the Titans’ in 1981, combining matte work with building miniature sets.

‘Clash of the Titans’

Slowly, I got to do more drawing-up or delineation of shots, blocking in colours, steadily taking on more responsibility, until I reached the point where I could complete a shot from beginning to end, with Cliff adding a few dots and dashes to my work… after all, he was the boss!  When we weren’t so busy, I’d use any spare time I had to improve my abilities in storyboarding, designing fictitious sets, developing imaginative solutions, and ways of achieving in-camera effects and optical processes in film and multiple exposures – always bearing in mind the real world of business … budget limitations! All this was done before the introduction of ‘digital’ and it was essential to be flexible and imaginative enough to come up with new techniques for achieving the effects that were needed.As my responsibilities increased and I was completing matte paintings myself, I learned not only how necessary it was to put 150% into every job, but also to handle comments from clients – whether good or bad!  That feedback would always result in me wanting to do even better in the future – and I think that’s another thing that helps keep me going today, the desire to impress … basically, showing off! 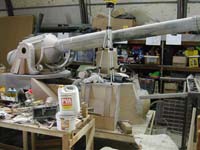 After then working for several years with the master of special effects, Derek Meddings, on films such as ‘Batman’, I started my own company, Mattes & Miniatures, and embraced digital technology. We are fully functional with a matte studio and model and special effects workshops which allow us to combine traditional film techniques with digital post production.

After 30 years, the drive hasn’t diminished and I still feel just as excited when I’m involved in big films as I did as a teenager. After meeting Terry Gilliam on ‘The Imaginarium of  Doctor Parnassus’, I went completely mad for a few days, locking myself in the studio at Bray experimenting! Over the years I’ve built up a collection of equipment there – cameras, motion control, lights – everything needed to get creative! Ultimately we went on to build miniatures from his designs and had a fantastic time shooting them. 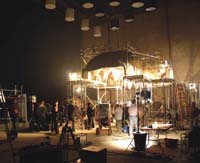 When bidding on a film, we are usually sent pre-visuals and storyboards, sections of script and a list of requirements. The fun starts with working out the best method of constructing a miniature – what it has to do, what scale to build it to – together with a breakdown of labour costs and materials. After the production has weighed up the methodology and costs, we wait for the go-ahead and, on receipt of a purchase order, invoice and, most importantly, money in the bank, it’s ‘all systems go’! Materials are ordered and technicians employed. Art Department drawings are provided in some cases and we are in constant contact with the director throughout the production. Terry Gilliam, as you might imagine, had a very clear vision in mind and so it was key to have his constant feedback as we were building the miniatures, as sometimes things that look OK on the drawing-board need to be modified once made as a 3D model (and of course everyone has to be clear of the budget ramifications of any changes to original specs).

Other times, particularly on lower-budget productions, rather than starting everything at the same time we design and make on the go, showing designs to directors and perhaps discussing ways to make models by ‘recycling’ things already around the Aladdin’s Cave that is the Mattes & Miniatures workshop in Bray. This was our approach on ‘Mutant Chronicles’.

Leigh Took and the finished model 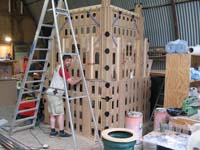 Working on the model for Mutant Chronicles

Why bother to make miniatures at all? Why not just create the whole thing in CGI? Well – miniatures offer the opportunity to have a three-dimensional artifact which can be viewed by the camera lens as ‘real’ – and the model can be taken outside – there is no comparison to using actual daylight with a backdrop of trees and landscape in perspective with moving cloud patterns.

I hope these  highlights from my journey, together with a potted description of how I approach jobs, will be helpful to those similarly driven – those with a ‘lust for film’. At the end of my career, which I don’t envisage coming for a good 20 years or so yet (!), nothing would please me more than to have the feeling that, through my own work, I have encouraged and helped others to pursue the career of their dreams and be successful in doing so.

FORCED PERSPECTIVE is a technique developed not only for miniatures but in the construction of full-size film sets – for example, in a street scene, the buildings will start to condense towards the end of the road and perhaps a ramp will be used to create a false horizon (readers take note of the comments on the Supergirl set in Terry Ackland-Snow’s article) It is a natural follow-on that this technique is used in building miniatures which means that a quite large landscape can be fitted into a condensed layered form so that, from the camera’s point of view, it looks like the real thing. The camera position might need to be locked off in a particular position but it gives an opportunity to create depth of field in a miniature.

LATENT IMAGING is an invisible image produced by the physical or chemical effects of light on the individual crystals (usually silver halide) of photographic emulsions; the development process makes the image visible, in the negative. Shoot a plate (a locked off shot of a landscape, say) then mask off the top half of the matte box on the front of the camera so you only expose half of the film. Take a small piece of that film to be processed then project that piece of film through the camera onto a piece of glass, then draw off the shot and extend it up and incorporate it with whatever is needed in the shot – eg castle or distant landscape or sky. Work on the matte painting and scrape away the bottom where the negative was projecting the plate footage, combining a painting with an unprocessed negative to create a final shot.

FRONT PROJECTION – tiny reflective glass beads, which are an integral part of cinema projection screens, are used in front projection material. The actor (or subject) performs in front of the reflective screen with a movie camera pointing straight at him. In front of the camera is a beam-splitter – a one-way mirror angled at 45 degrees. At 90 degrees to the camera is a projector which casts a faint image of the background on to the one-way mirror which reflects the image onto the performer and the screen; the image is too faint to appear on the actor but shows up clearly on the screen. In this way, the actor becomes his own matte. The combined image is transmitted through the one-way mirror and recorded by the camera.

Posted by networkninenews on May 9, 2013 in Art Department, Cinematography, Special Effects